So yesterday night we left Athens and hopped on a quick 1.5 hr flight to Paphos, Cyprus in search of Paul Manafort’s laundering bank accounts. The plane was mostly empty, I laid out across a whole row and slept, so the 40 minute train ride from Athens to the airport actually felt like the longest part of the travel.

We had to take a pricy taxi from the airport into Paphos city center and the whole ride was really messing with me because apparently they drive on the left side of the road here. Walking around today I noticed how engrained into my brain driving on the right is. I was checking the wrong direction before trying to cross the street all the time. Walking in the street in the same direction as traffic rather than against it…it’s very difficult to get that out of your system, and frankly, I’m leaving in two days so I’ll try not to retrain my brain anyway.

Cyprus feels like a country without it’s own identity. It’s in the heart of the Mediterranean between Turkey, Egypt, the middle east and the grecian islands. It’s actually surprisingly close to Syria. Due to this location it has been a strategic settlement throughout the centuries. There is influence from Egyptians, Greeks, Turks, and I’m sure many more. The ancient city of Paphos was once a significant settlement but fell out of importance in place of other cities after a major earthquake in the 4th century.

There are signs of all this influence all over the city. There is an archaeological called the Tomb of the Kings where the tombs model places of stay for the living, which is taken from Egyptian culture. The country has been occupied by greeks and turks for centuries and the population is still divided between greek cypriots and turkish cypriots. Tension between the two turned to violence in the 1960’s, and now the country is divided into two sections. The turkish part is recognized as a legitimate government by Turkey alone, with other nations seeing it as an illegal military occupation. 4% of the country is now a UN buffer zone, making it feel like the Korea of the Mediterranean.

It was a British territory at one point and this is also very apparent in walking around Paphos. For one thing, they drive on the left. The power outlets are UK style. There are english restaurants and other restaurants have menu items that read something like:

There is also noticeable asian influence. Indian and Thai restaurants. Exotic fruit at the market. I can only imagine that Cyprus was a popular stop on the trade route between Asia and Europe. I forgot to mention but Cyprus is currently an EU nation and uses the Euro.

All of this adds up to me wondering who the actual residents here are. And I’m starting to feel like there are no locals. Our airbnb host is a Latvian who has previously lived in England and Denmark. The beach is filled with old people and young families, many of which are from the UK and Russia. The workforce are all foreign as well. The guy helping me at the grocery store was from Romania. Our waitress was Georgian. The only pattern I see is countries sharing a boarder with Russia. I titled this post in latin because more people are speaking broken english than greek. Where are these local cypriots??

So we got to our airbnb late yesterday (Saturday, the 4th). Quick side note: yesterday was the 4-month anniversary of me traveling outside the United States!!! Ieva, our host, moved here a little while ago from Copenhagen and now she’s using airbnb until her roommate gets to Cyprus.

Today Kristina and I had a late start (drained from Greece) and headed into town. We spent a long-ass time looking for somewhere to eat because everything was so expensive. It felt like a cheesy tourist destination and everyone looked like old Americans looking for a safe beach to take a boring vacation at, but I think they are mostly British. People are still definitely surprised when I mention I’m from the states. So we tried and failed at a few restaurants with good reviews that were “cheap eats” and kept walking past a bunch of other over-priced restaurants. I could tell they were going to have mediocre food but the prices were 8-12€ for an appetizer or salad and 18€ and up for entrees. 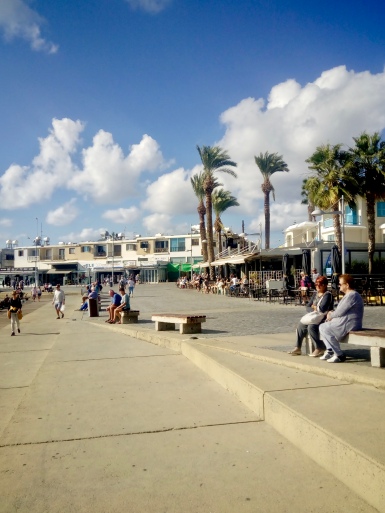 old people on the beach

Finally we found Pengouino Cafe which had reasonable prices. We wound up getting two salads for 15€ which may sound pricey, but they were huge and excellent and loaded with fish! Yum!!! 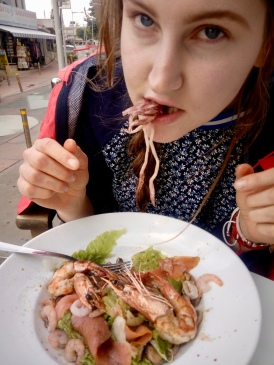 Checked out the Paphos archaeological site after that. Supposed it costs 4.50€ but they didn’t even have anyone managing the entrance. Shwing!!! It wasn’t that impressive, but I think that this has a lot to do with the fact that yesterday I was in Athens, and not much can beat that… The one cool this was definitely the mosaics. There are mosaic floors on a ton of the buildings and they are beautiful. It’s so hard to try and wrap your head around the fact that people were walking around in these homes over 2000 years ago. 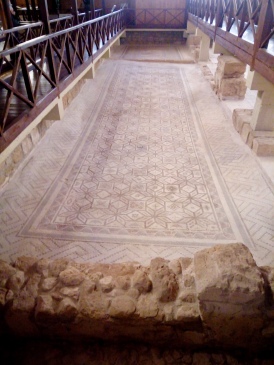 Finally went to the grocery store on the way home. So much fun fruit! I splurged and got a bunch of exotic fruit. Sweet lemons, star fruit, guava, cherimoya, papaya, merlin orange, kumquats (lol), and dragon fruit. Time to dig in! 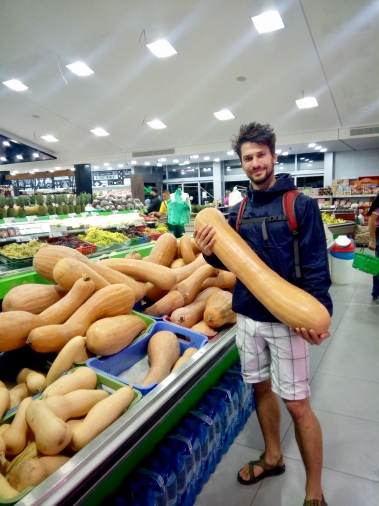 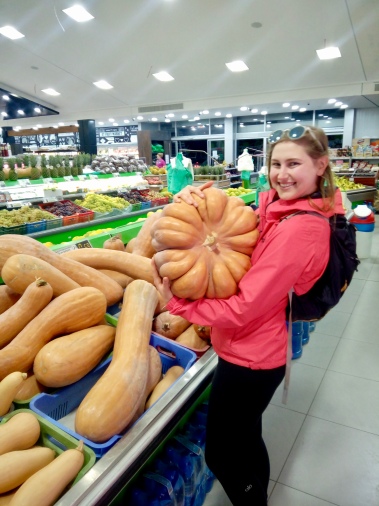 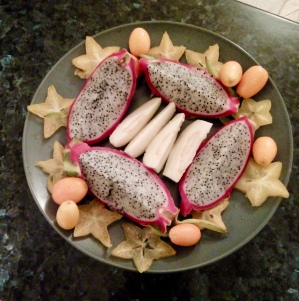 So the next day started off well… After two failed attempts, I got my frappe finally. They’re actually really good if you get a real one. We then took a bus up to the beach a bit north.

The aptly named Sandy Beach was not very sandy. We found a nice private pocket, which was really nice, but we ran into a bit of an issue soon after. The waves were pretty strong and we were walking out on rock formations to get into the water. Kristina lost her balance and got tumbled around a bit by the waves. When we got back to shore we discovered that she had stepped on a sea urchin! 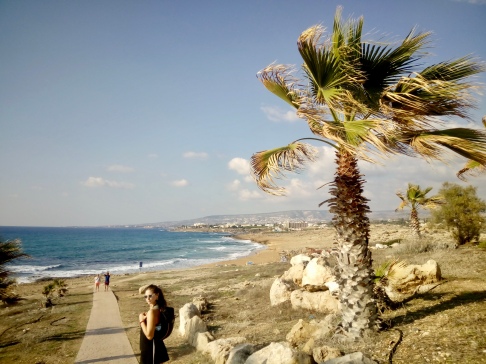 Well this cut our beach time a bit short. After a few hours of gimping through town we got back to the apartment. The tweezers didn’t work. Soaking in vinegar didn’t do anything. We ended up going to the medical clinic the next morning in order to get them removed. All I can say about that is that Kristina is a trooper. Fun fun! That got wrapped up just in time to rush to the airport and head off to the middle east! 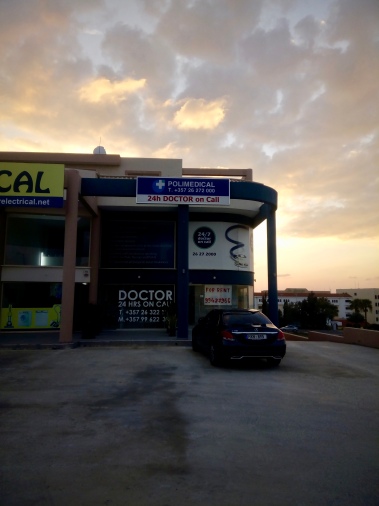