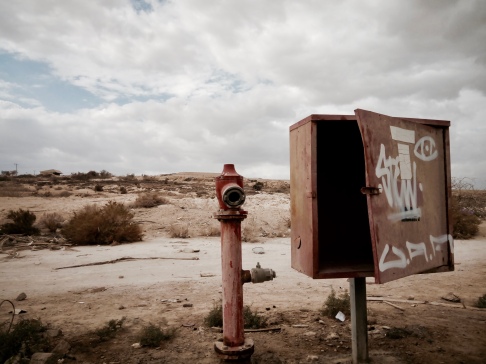 After departing from Jerusalem, Tyler and I crossed the border to Egypt on foot. We met a lovely couple from Israel in Eliat who joined us on our trek into the land of camel milk and honey. Nadav and Talya would later become instrumental in introducing us to some really exotic spots.

The borderline control in سينا‎ (Sinai) was rather unusual— it was desolate and I certainly felt a small dose of unease in that the men are absolutely eyeing the ladies down. Typical. Border control was standard, though the uniformed man confiscated one of two knives—the switchblade I had in my backpack. I’ve been to seven countries now and they’ve passed every checkpoint except in Egypt. Go figure. 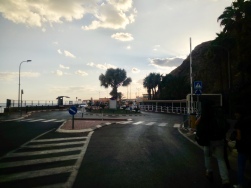 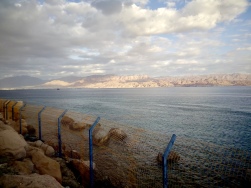 The four of us jumped into a taxi and passed not one, but eight or nine different checkpoints. My passport passed through many hands as the guards scrupulously examined our disposition. Nadav ended up directing us to a Bedouin camp, Sabah, that functioned as 1. A good mid stop and 2. An oasis situated on a sandy beach. Tyler and I were treated to an ahem, royal suite— a private hut fashioned from tawny straw and a few 2 x 4’s. The walls were punctuated and wind seeped into every crevice that left us cold and sleepless. Alas, the entire lackadaisical experience was centered around lazily absorbing the sun and rolling around in the hot white sand— a beautiful departure from the heavy clouds and chill that previously greeted us in Jerusalem. 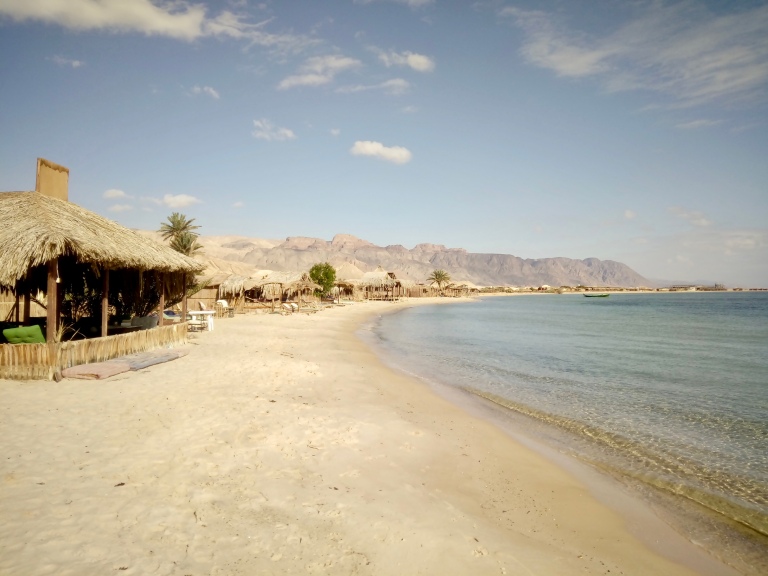 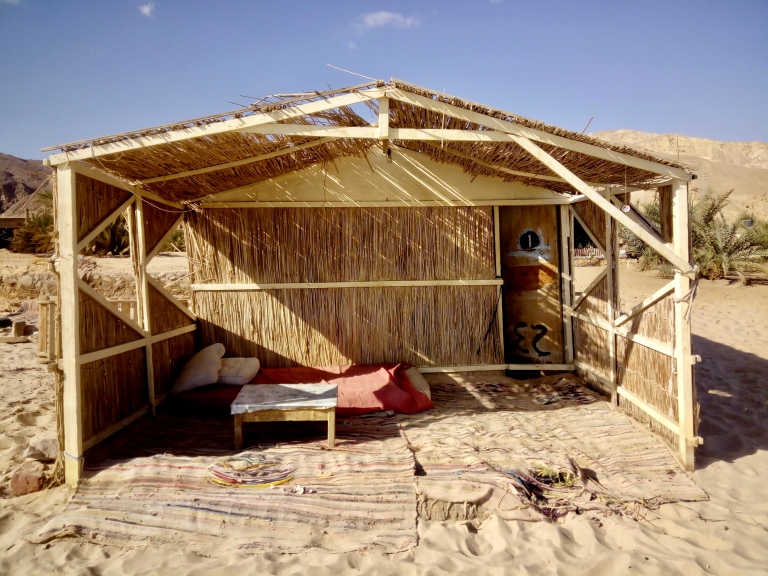 I met a very fun individual Yuval who enjoyed having me read his birth chart and later let me borrow his snorkel kit. It was the first time I had ever gone snorkeling and the coral reefs in Sinai are touted as some of the best in the world.

The Red Sea plays host to an encyclopedia of colorful fish— clown fish, stripped baby fish and unrecognizable bodies in a kaleidoscope of vibrant hues. Poisonous or not, I swam through them, looking back as my body torpedoed through the water and bubbles shot up through my toes. The Bedouin tribe in Sinai are lucky to have this in their backyard. 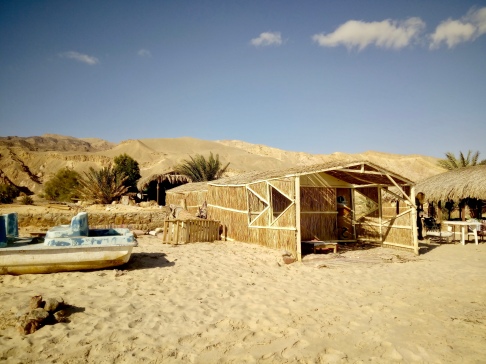 The next morning we arrived in Dahab, a quirky little town nestled against the beach. We stopped at Seven Heaven, a hostel with the most warm and genuine host, Mostafa. His smile was akin to a child’s innocent gaze when they discover something curious. Tyler and I really liked him and he will be driving us to Cairo in a few days.

After dropping off our things we went out to get some food. It had been recommended that we try seafood while in Dahab. And as soon as we got out on the street we found some places with the fish on display right in front of the restaurant. The man outside the restaurant helped us select a platter and then put the fish we chose in a bucket and sent them off to be cooked up!

Every meal in Sinai comes with an accompanying spray bottle of water to ward off hungry and rather audacious cats. The cat photoed here definitely was Garfield, but most of the cats here have a very Egyptian look. And to think this whole time I thought those hieroglyphs were just made by bad artists. The stray dogs also look just like the ancient Hieroglyphs. It’s crazy to think that that look has carried through for thousands of years! 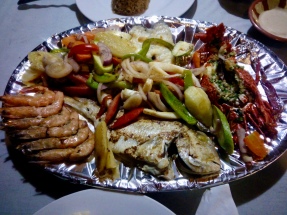 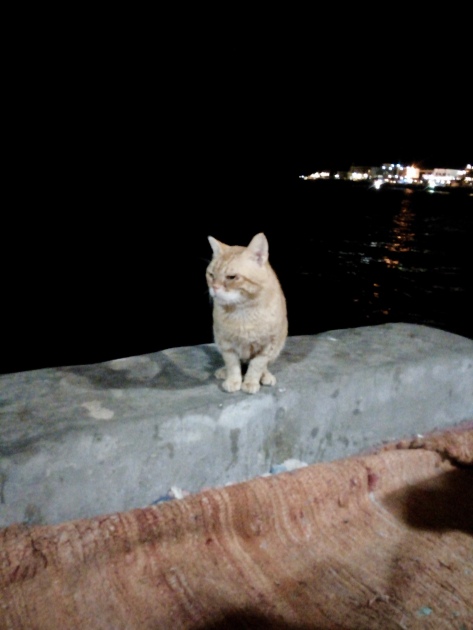 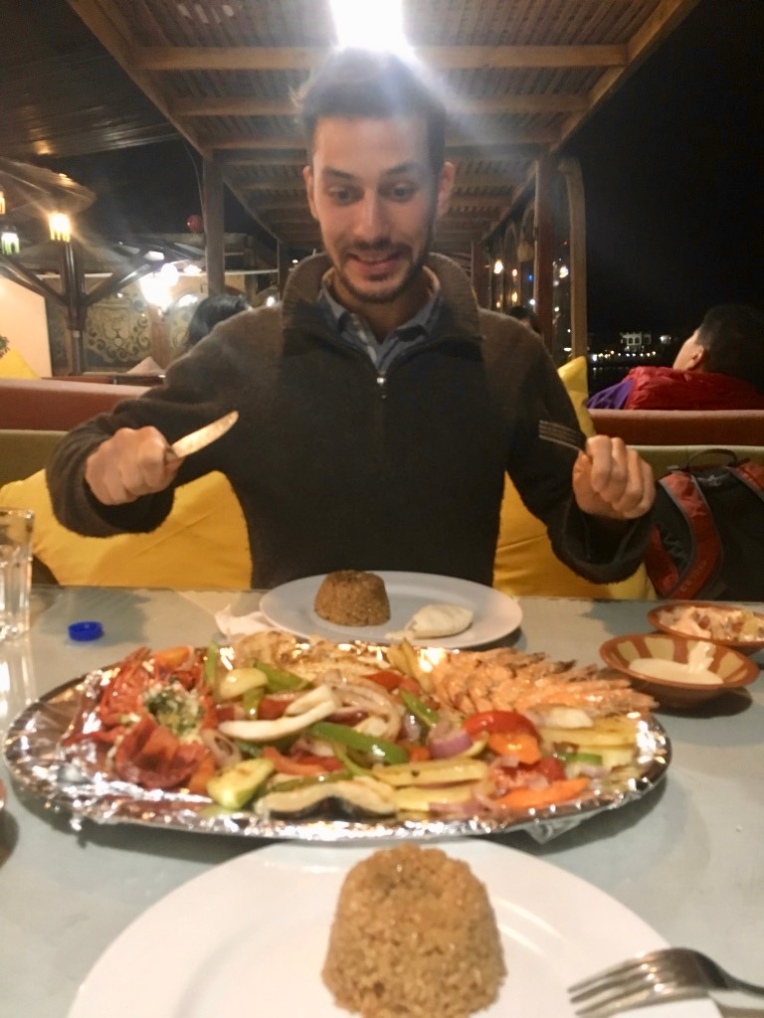 We then took to the small streets in the center of town— they resembled a scene from a spaghetti western, dry and acrid with tons of shops and restaurants sandwiched next to each other. The locals are intent on selling so they each have a pitch that they recite that is lifted from the same script. I mean, really. It’s hilarious. It starts with, “where are you from” after I answer, “the US,” they smile widely, head tilted, “welcome to Egypt.” It seems genuine. 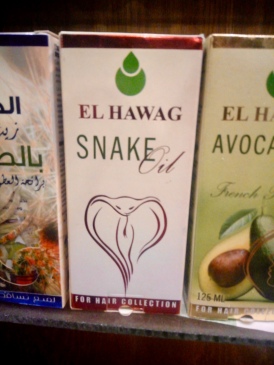 at this point, why even bother trying to sell it as something it isn’t 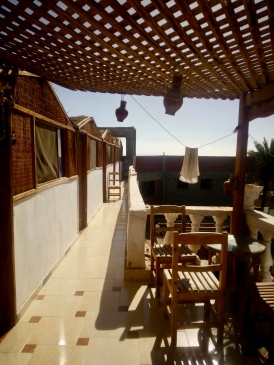 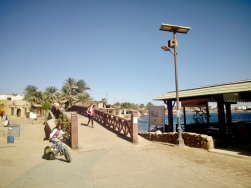 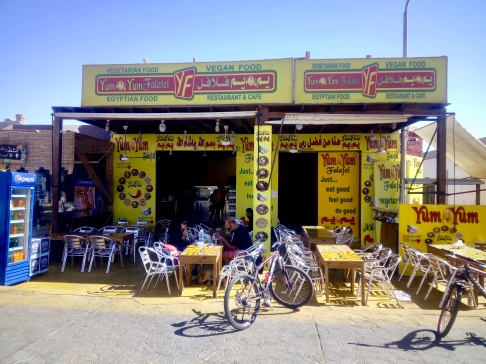 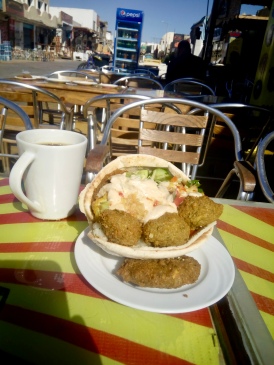 Our third day there, we found ourselves at a heavily coveted destination, the blue hole. We were surprised to find that it sat very close to the sandy bank and was easily accessible. Many divers have ventured into the dark abyss, never to return. (Que theme from Jaws). To introduce some action, we rented snorkels for 20 Egyptian pounds $1.15 usd and took to the water. A young boy, 19 y/o decided he would be our free tour guide. He was so sweet but rather pushy on showing us the reef. Nevertheless, his motives were pure. 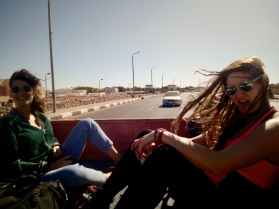 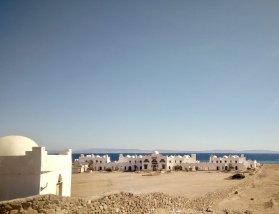 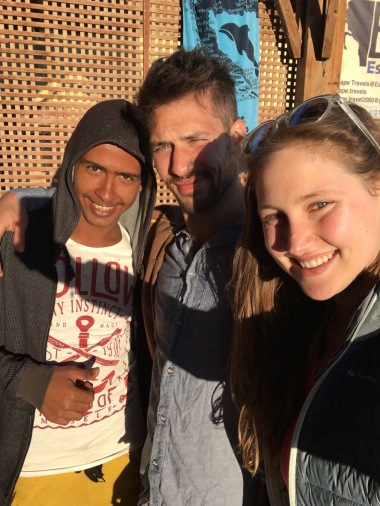 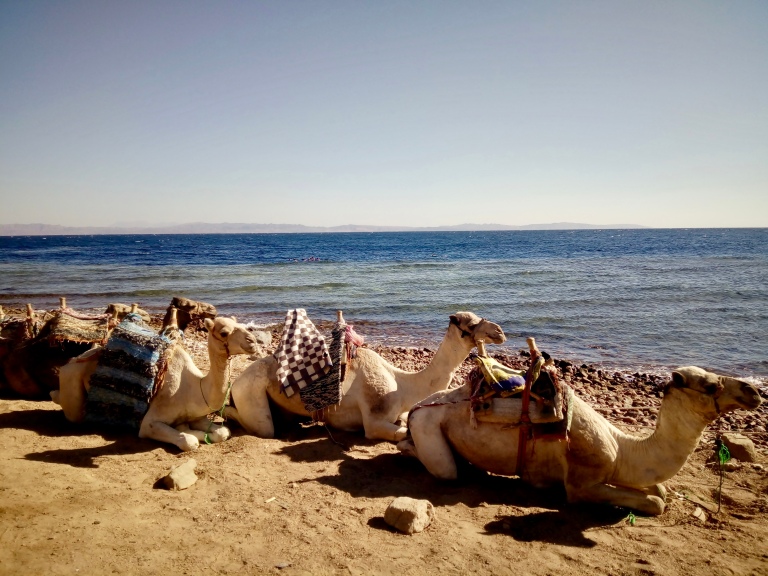 There are three options to get to Ras Abu Galum, the small Bedouin village that we planned to sleep in that night. 1) by boat 2) by camel 3) by foot. We opted for (3) in order to take our time and enjoy the scene. 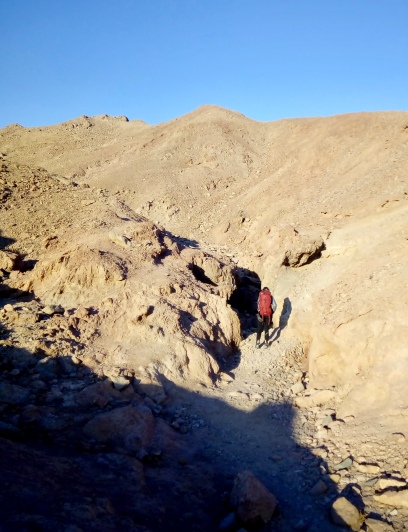 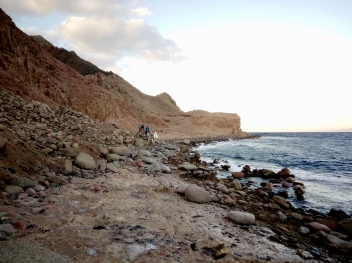 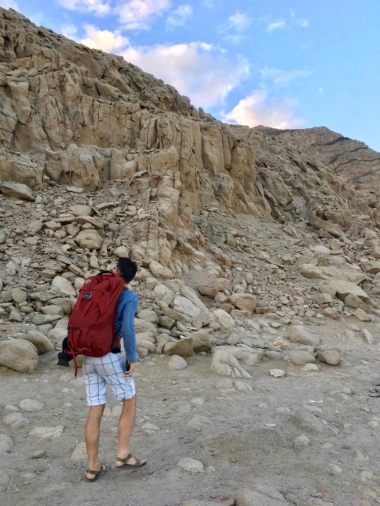 The whole time I kept thinking of the ending scene of Planet of the Apes:

Today I find myself sitting and penning this note from a high point on the ridge of a rocky Mountain bed in Ras Abu Galum. I can see our friends and several Bedouin guys lining the beachfront. We trudged across the desert one hour on foot yesterday and this morning we strolled along the coast, only to realize every Bedouin hut is run by hippies from other parts of Egypt. The vibe is chill af.

Our host in Ras abu galum is this amazing man, Tarek who I later gave the nickname, Fela Kuti. Trust me, it’s so fitting. Him and his brother bought the hut with ten accommodations from a Bedouin family and have since ran it with gusto. They play solid music and offer radiant smiles, and that’s definitely enough for me.

As I look across the landscape, sandy and brown hues are predominant with the only contrast being the jewel toned Red Sea which illuminates the permitter. Camels casually stroll across the flat grounds while I look in awe. It’s time for another snorkeling sess. 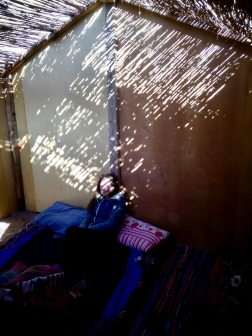 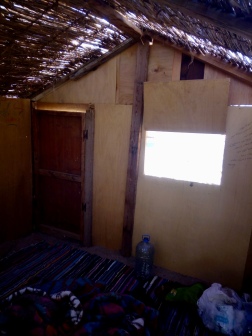 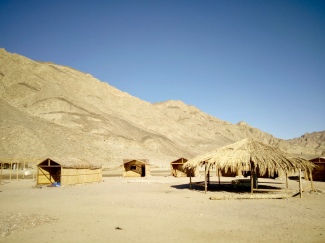 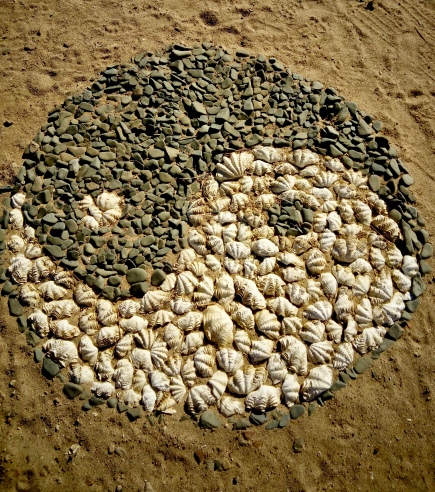 We said farewell to our Israeli and Egyptian friends at the Yoga Camp and then made our way, a bit later than planned, back to Dahab.

We walked back to Blue Hole and from there a local asked if we needed a taxi and he made the call for us. While waiting we sat with a group of locals and smoked some hash and laughed for a while. The locals here are so incredibly friendly. When I first arrived in Egypt I was so paranoid. After a matter of two days I was walking around late at night knowing that if I was in the slightest pickle a local would come help me.

By the way, there is a section of the road between Blue Hole and Dahab that is actually banked. Our taxi zipped back and forth along the turns and we laughed the whole way.

We grabbed dinner that night in Dahab at a place called the Bamboo Hut. I was feeling lucky so I ordered Fatwa Dawood Pasha having no clue what it was. Well…the food wound up being so damn good that we came back the next night for the exact same meal. $14 total got us tomato cucumber salads with tahina, pita bread, seafood soup, egyptian soup, a platter of grilled vegetables, spaghetti (don’t ask me), a side of seasoned rice, tea after dinner and the main show which was the two dishes shown below. Whew! Let me catch my breath! Yeah so the one on the left was a shrimp tangine and the Fatwa Dawhatever ended up being kofta. They both were packed full of flavor. We came back for the same thing the next day. I asked for the kofta on spaghetti and despite their extremely poor english (the worst yet was at this restaurant), they nailed it! 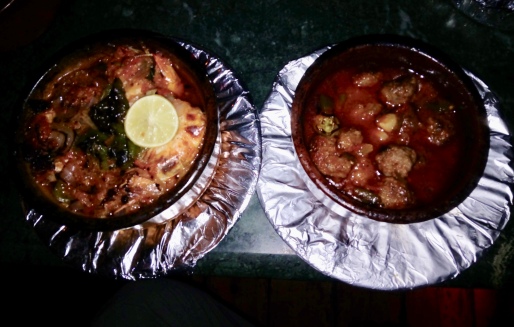 The next morning we were surprised to hear from our friend Andrew, who was asking to see if we were alright. I promptly checked the news and found out that sure enough, front of the New York Times, was a tragic attack that occurred in Sinai.

Prior to coming here, we had done a lot of research on the safety of coming to Egypt. All of the national travel advice websites, USA, UK, Canada, advised against it. On a friends suggestion, I checked out the site storymaps that is an interactive map showing terrorist attacks, where they occurred and what group they are affiliated with.

I was starting to notice a clear pattern. Government websites and media were saying “Avoid Egypt!” but friends and travelers posting online said it was safe. We obviously ended up making the decision to go. Sinai had been talked about as a dangerous area, having frequent attacks, and this is true on the northern coast near Gaza. The Islamic State has a presence there. What I came to find out was that the country is very compartmentalized. There are frequent military checkpoints on the roads.

Still it’s really crazy to think that we were in Sinai when this attack, killing over 300, occurred. Below I made a map showing our trip through Egypt. When the attack occurred we were in Dahab at the time. Here is a BBC article and here is the NY times article. 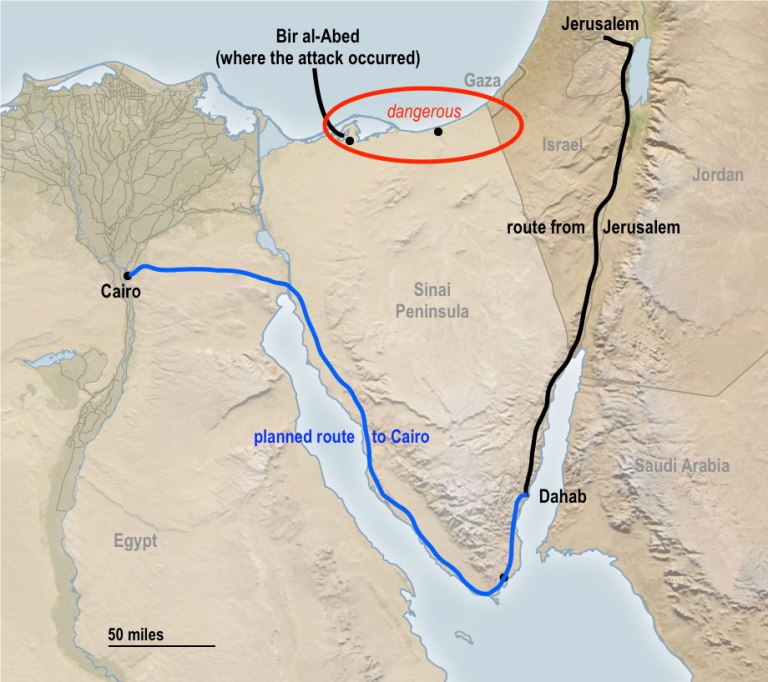 That day we randomly made friends with Willy while asking around town for diving instructors. He was sharing a coffee at the same bakery and it turned out that he works at Seven Heaven, the hotel we were staying at. The next thing I new, I was in the water geared up with my flippers and mask and oxygen tank!

Diving was very overwhelming. There is so much going on between the very fact that you’re breathing underwater and how many incredible fish there are to see. It makes me excited to try again perhaps in Southeast Asia. I got to see tons of different fish, including a handful of lion fish and three barracudas!

We ended the night dancing to a local band at this place with the chillest vibe. There were swings that swung out over the water and a net hangout suspended over the water! The band consisted of an acoustic guitar and a number of guys rocking out on various hand drums. A great way to end our adventures in Sinai!