Kristina and I arrived in กรุงเทพมหานคร (Bangkok) on the 29th. Right off the bat the airport was a lot nicer than I had expected. All in all Bangkok actually has some really nice areas that I think are cleaner than NYC. On the skyrail into the city, we got a glimpse at endless infrastructure and green. I have lived in Seattle. I know green. But this was a tropical green beyond even that. Swamps in peoples backyards. Muddy rivers running the blocks as common as roads. Luscious foliage everywhere.

We got out and walked the city, trying to decide on the best neighborhood to stay in. Bangkok is very spread out. There are skyscrapers all about, making it difficult to identify a true city center. We ended up deciding to head to Khao San road. This is a famous “backpackers road” that is a hot destination for travelers. Seems appropriate. Let’s check it out. 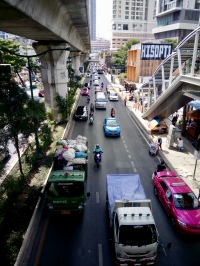 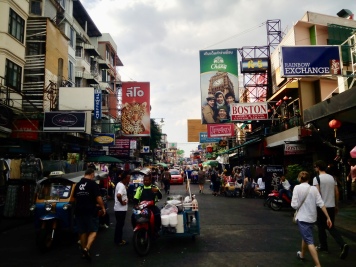 I have to mention now, that I am writing this very delayed. It’s currently end of December. I’ve been traveling in Southeast Asia for a month now. The interesting this is that had I wrote this earlier, I would have been largely clueless as I wrote. Asia has by far been the hardest place for me to get a handle on. After weeks I was still so confused about how this society operates. How we, as tourists, are perceived.

Khao san is…interesting. The streets are loaded with food carts. Cheap shopping is all around. The street is completely white-washed. The only locals are the staff. There are asians but I’m pretty sure they are all from China, South Korea, or more generally, just not Thailand. The frog croaker women walk around with there colorful hats and try to sell croaking frogs and tacky bracelets with shock-factor text on them: every enumeration of english curse words combined with demographic types. I must have been asked if I wanted a suit or tattoo at least 10 times a day. “You want tattoo? Very cheap!”. Very cheap?!?! Maybe you should reevaluate your marketing strategy… Check out the photo of the bro tattoos for a lol.

Somewhere between 9-10pm the scene transforms. The club music starts. The scantily clad women come out. The questions change. The offerings of very cheap suits shift into offerings of buckets and ping-pong shows. Some guys just make a popping sound with their mouths instead. The buckets are literally plastic buckets with a small unopened bottle of liquor and accompanying soda. The ping-pong show…I’ll let you figure that out on your own.

I was so confused. Is this travel? Where the hell am I? I had heard so much about Thailand as the “land of long term travel”. Is this really where people go for months to find themselves???

Well after getting some pad thai and cheap smoothies we headed back to our hotel. I had had enough of this.

Another weird thing I’ve observed in Bangkok is the range of prices. I can’t think of a single place I’ve ever observed with this variance. You can get a whole meal for $1 or you can still have a grumbling belly after dropping $20. I think the stay is comparable. Accommodation ranges from $5/night dorms to $50/night private rooms. I guess the prices are good if you know the area well, but isn’t the whole point of travel to go places you don’t know well?

It has been quite common for me, in Bangkok, to not trust the street vendor, and instead resort to a sit-down restaurant. A cheap sit-down restaurant will have $3 meals but plenty will have prices twice that or more. Oh and I can usually eat two of these meals. The portions are small. So…$6 a meal. The street food is not guaranteed to be $1 and I was often turned off to it because the option is typically grilled meat that has been sitting out on the dirty streets for god knows how long.

In general the prices are certainly cheap if you’re not careless or  vegan. I can’t help but be bitter at the fact that things are being marked up because of what I look like. It’s almost better, to me, to pay $4 for a taxi in Serbia than to pay $3 for a taxi in Thailand, when I know that the locals in Serbia pay $4 and the locals in Thailand pay 50¢. 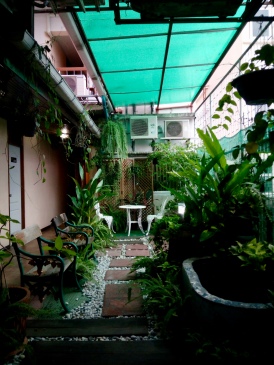 Woah!!! I’m sitting on the porch of our hotel next to the river and saw something long and windy swimming my way. It was a monitor lizard! About 3-4ft long! So cool!!!

Bangkok does have an interesting style. Many of the buildings are vibrant colors that would, in another country, be so tacky. The taxis are either hot pink or sparkly green and yellow. Somehow they pull it off here.

The next few days we walked around and explored Bangkok. We got really good food at a vegan/vegetarian place on Khao san. Mango pad thai!

Overall, there wasn’t too much activity due to fevers and runs to the bathroom. I still, to this day, don’t know if the issue was one recurring parasite from being in Egypt or if the food in Thailand was getting me as well. My theory is that the bathroom runs were from Thai food but the fever was Egypt. At least for my body, I’m finding that when something bothers my intestines I’ll know it within minutes of finishing the meal. Get to know yourself exercise! Fun fun!!!

With all the sickness struggles, with getting bombarded with sale offers for crap I don’t need or want, I kept thinking about this wild experience we had had in Egypt, which was still very fresh in my mind.

Things that Egypt prepares you for: 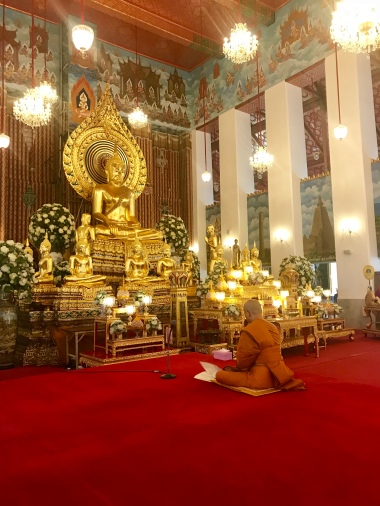 Shelley finally made it to Bangkok! We met up at the airport and…I’ll just say, it was a taxi ride to be remembered. Shelley and I are true friends now. You can ask her for details.

Next morning the crew, (Kristina, Shelley and myself), went to explore some temples and stuff. We went to Wat Saket, known for having a long winding staircase to the top. The stairs were anything but steep. Didn’t even loose a breath! 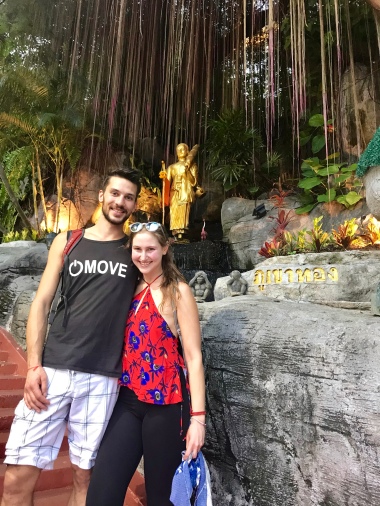 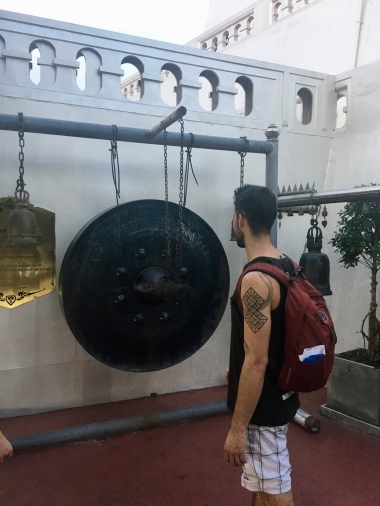 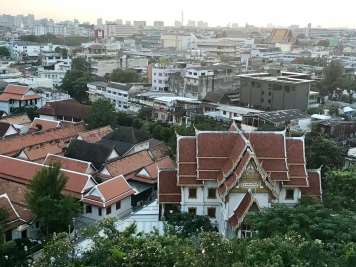 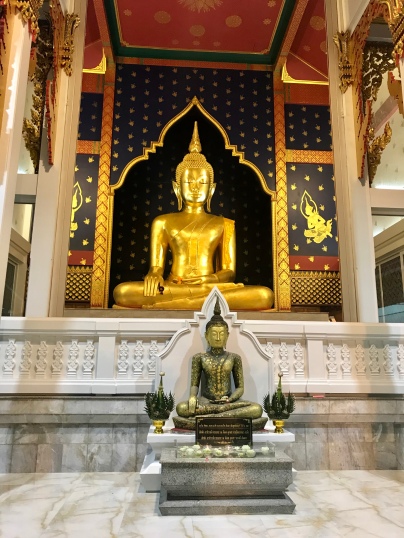 We then finished the day off back at Khao san road. Shelley and I were having a giggle-fit at the fish spa. It’s so weird.

The next day Shelley and I went around exploring temples and other attractions. Wat Arun was by definitely my favorite. It was a very unique looking temple. Honestly, a lot of the other temples are such that once you’ve seen one… 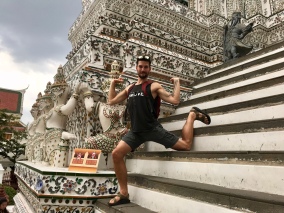 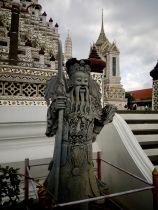 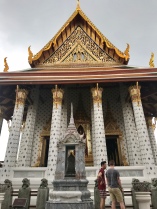 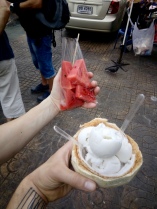 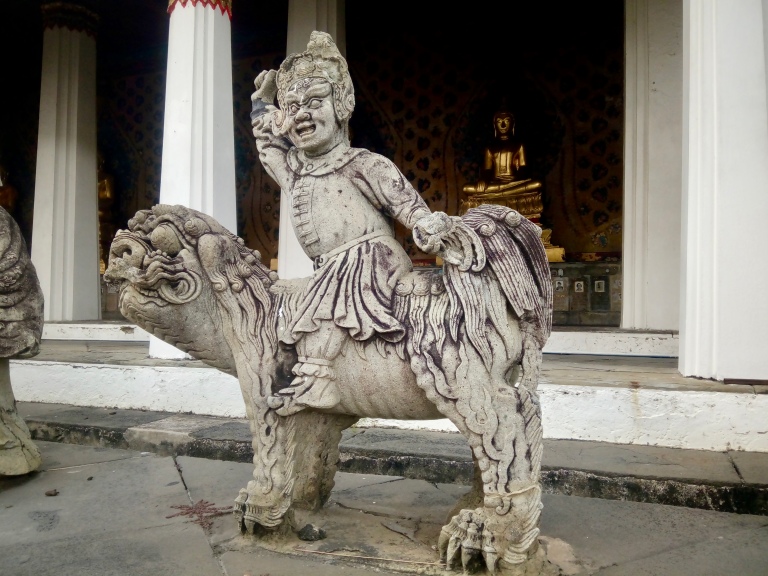 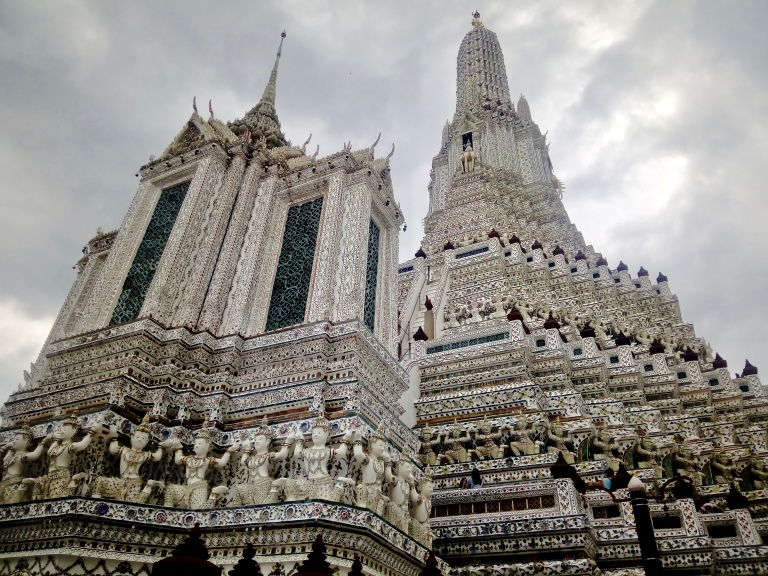 Next up, reclining Buddha. Brace yourself for swarms of tourists. 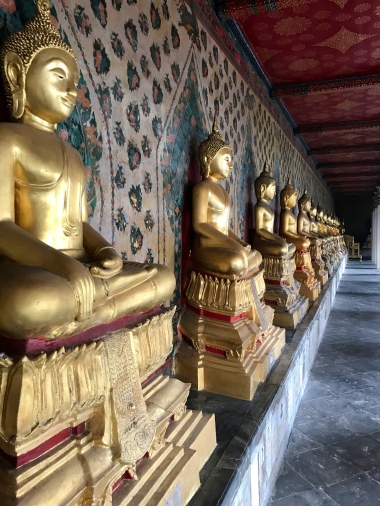 Well. That was about it. Bangkok has some good food for cheap. But it does become hard to enjoy when you are associating the food with shitting yourself. I can say that after a month my stomach has finally settled and I have a better gage on what I can and can’t eat. I’m enjoying the food a lot more now. Sticky rice is bomb, coconut ice cream is also pretty great and Pad Thai is of course the staple dish.

The entire time I didn’t really connect with any locals. It’s very easy to find traveler friends to hang out with. But it sort of feels more like a party playground than an immersive experience in a different culture. More on this in the following posts.