On to a new country! On to new adventures! Andrea and I just arrived in India three days ago after about two full months in Thailand. It had been a bit too much after a while, so it was nice to slow down, but I’m glad to be on the road again and exploring new places.

We flew into சென்னை (Chennai) on the southwestern coast. On the flight there I asked some returning locals if they spoke Hindi, which resulted in my first cultural lesson about India: there are a shit ton of different languages spoken here. Here in Tamil Nadu the language is Tamil. I’ve heard the claim a few times that Tamil is the oldest language. I’m not sure what that exactly means…but according to wikipedia it’s “one of the longest-surviving classical languages in the world”. In the north the languages are all very similar to Hindi, which is why one can speak Hindi there and generally get by in most states, however in the south, things are different enough that the common language across India is actually english!

So I got a couple lessons on the basics of Tamil and then we arrived in Chennai, ready to go use it. Chennai is very run down, car horns are incessantly blasting as to say “I’m here, don’t swerve into me!” We got to our hotel in the middle of town and called it a night.

a nice foot scrub in our prison bathroom

After an interesting night full of bug bites Andrea and I headed out to explore the city. We stopped for breakfast nearby and that’s when I realized how much I was going to enjoy India. We had no idea what anything on the menu was, so we asked a friendly family sitting next to us to help order. At the moment I’m slowly growing my vocabulary of Indian cuisine via trial and error which is a really fun process. After being in Thailand and Myanmar, where ordering an unknown dish is always a gamble, I have to say that Indian food is such a fun playground to explore. The worst anything ever is, it’s a bit bland, but far more often than not, things are just packed with flavor, and then they give you another flavor packed sauce to dunk it in. Potatoes, funky breads, and lots of vegetables sauces is the game here.

I definitely won’t forget how fun that first breakfast experience was. I wouldn’t know how to eat something and I’d just check over at our neighboring family, inquisitively, and either monkey-see-monkey-do, or they would happily explain how to do something. For example, the coffee in India is served in a cup over a bowl. The sugar isn’t mixed in, so you’re supposed to pour the coffee from cup to bowl to cup, back and forth, until it’s mixed.

As if it couldn’t get better, a coffee is $0.65 and any food dish is roughly $0.90-$1.40. Just to name a few dishes, we got masala dosai (the flat pancake thing which is stuffed with mashed potatoes), poori (the fried puffy bread) and idly (rice cakes). 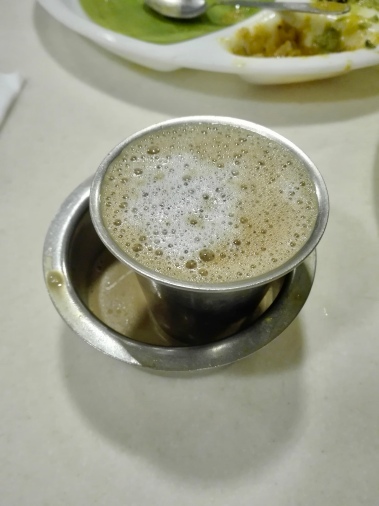 We did some walking around and exploring for the rest of the day. Stopped by a random cart on the side of the street where a man was putting a lot of care into some peanuts. After watching him funnel love into these nuts for maybe 15 minutes I have to say the outcome was underwhelming. 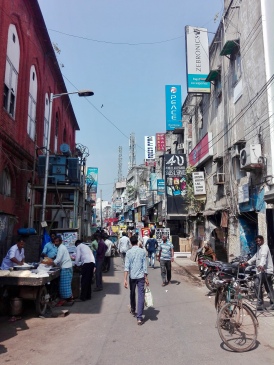 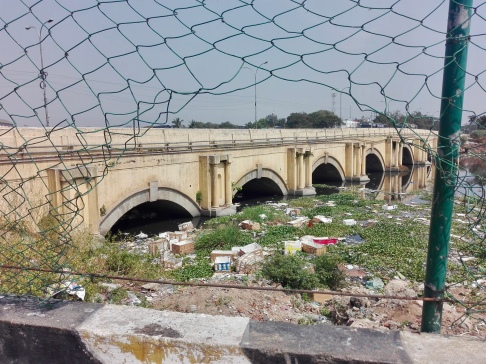 We also stopped by the beach. There was no shortage of selfies to be had with the young locals. I got to try an India version of chili rellenos for just $0.16. And then we saw a woman getting a tattoo on the sidewalk. Never a boring day in India! 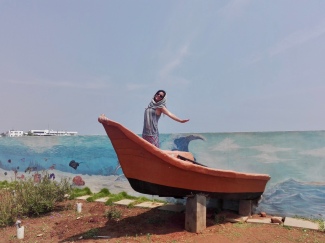 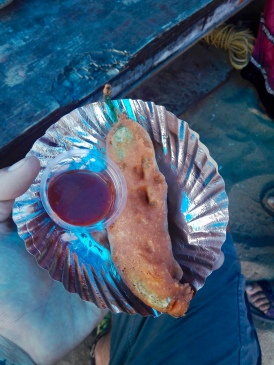 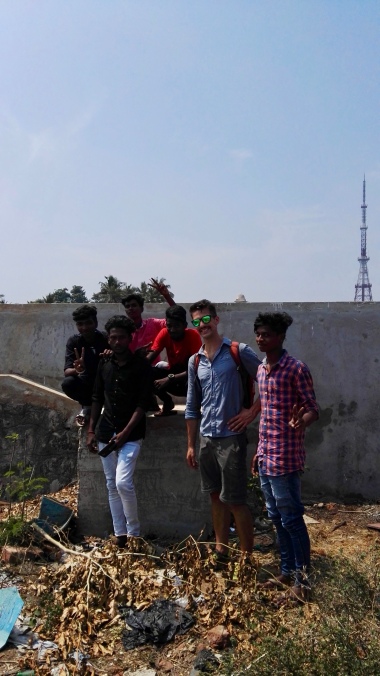 The first one, is more of a Thai observation, I suppose. It’s slowly wearing off at this point, but Andrea and I had heavy Thai mannerisms when we arrived here. We were speaking and shaking our hands in ways that were heavily influenced by where we have been the past few months. I imagine in a months time I won’t be able to stop bobbing my head from side to side!

We have been struggling so hard to understand people for the past few days. Indians speak far better english than Thai, but it is with such a thick accent that it is near impossible to understand without your full attention, and even then it’s difficult. I think that this has a lot to do with the fact that english is a common language here, and most locals use it with other ESL Indians than with native speakers.

Jesus has a huge presence here. After not having seen, I think, a single church for my whole time in Thailand, I was very surprised to see so many here. Hinduism is the primary religion here, but Islam and Christianity are definitely around. I have trouble believing that Tamil Nadu is 88% Hindu from what I’ve seen.

On a somewhat similar note, I found out that the cast system is still alive and well in India. There is no official identifier for what your cast is, but like the way that the first name will indicate what religion you follow, the last name will identify your cast. (See that segue I did there???)

On an entirely different note, crossing the street in India is absolutely terrifying. Andrea and I have come to use the expression “Live to cross another street” because even if you cross one or two, there’s no guarantee that you will survive the day. The sidewalks come in and out, and mostly are non-existent. The streets are poorly if at all maintained. And drivers won’t hesitate to get extremely close to you as they pass. It’s a bit of a game of chicken I think. If you seem hesitant, then they’re going to plow forward and you better get out of the way. Andrea actually got hit by a rickshaw the other day. It was turning a sharp corner as she was crossing the road and it just gently knocked her. She’s perfectly fine and the driver was actually very nice. He stopped and made sure she was okay. But still…you gotta watch out!

All in all I have to say that I am really happy and excited to be in India. It’s far far more challenging than traveling in Thailand, but it’s also more real. The english is good enough that we can converse with locals. I have met people everywhere on the spectrum of total dick to genuine hospitality. And it’s not sugar coated. Thailand is like a safe-house playground for tourists, but India is not here to accommodate me. I have to make my way through it with all the twists and turns that may come. I’m excited for the adventures to come!