Andrea and I arrived in Nepal not a moment too soon, i.e. on the day that our India visa expired. We popped over to the nearest land boarder on the far west side and I can’t thank Andrea enough for being on the same page as me with this: essentially, we heard that Nepal offers visas on arrival and decided not to worry about anything until the day before our India visa expired. We are currently busing our way through Nepal and doing all of our research and planning on the fly when we find a café with acceptable internet speeds. Seasoned travelers indeed!

Let’s start with some basic information. Nepal is a landlocked country on the south side of the Himalayas. It has a population of just under 30 million with a population density that is about half that of India. I’m not sure how much the mountains play a role, but just from our first days here, I feel as though there is far more undeveloped land, even right next to the highway, in comparison to anywhere I’ve been in India.

I was surprised to find that Nepal is majority Hindu, and only 9% buddhist. I had many impressions about Nepal that are still yet to be put to the test, but I am getting the feeling that my image of Nepal was really coming more from the little I know of Tibet.

So thanks to the religious alignment, but along with some other factors for sure, it seems that Nepal and India get along quite well. Nepalese citizens can travel to India without a passport; we were chatting with some guys on our way over the boarder that had just stopped in Haridwar (5 hours away from the boarder into India) just to go for a swim in the Ganga River. Indian currency is generally accepted here. The language is also very similar: of the few hindi words that I have learned so far, they all are exactly the same in Nepali.

Crossing the boarder, we had a wonderful sunrise cruise on motorbikes:

At first, it felt like we were still in India, but things slowly start to become apparent that are notably different. First off, meat, alcohol and cigarettes are far more prevalent here. Especially after spending some time in Rishikesh, where all three are practically banned, this stood out prominently. Nearly every other store is a liquor shop and the restaurants always have booze-lined shelves.

The food is also quite different. Thali’s still seem to be a staple (a thali is an assortment plate with rice and some flavored vegetable dishes and a stack of fresh roti’s to soak it all up). Other than thali’s, I am yet to see traditional Indian food, northern or southern. Instead, chowmein is a common choice and it is excellent here! Also common: mo-mo’s, which are a kind of small dumpling stuffed with veggies or meat. The food is spicier too. Yum!

We are on our second night in Nepal, in the town of कोहलपुर (Kohalpur). Yesterday we arrived across the boarder in भीमदत्त (Bhimdatta) and then we took a bus to Kohalpur. The distance between the two is 125 miles and yet the trip took us seven hours. That comes out to less that 18mph on average. The irony of this is that we were on a very well maintained highway, far better than most of what I’ve experienced in India. It seems to be the way public transportation goes in Nepal that buses fly down the highway at racing speeds, honking horns and incessantly passing one another only to make all too frequent stops with the occasional ridiculously long rest. What likely could have been a trip under three hours, dragged on for seven hours instead. Tomorrow we make a trip of similar length to Lumbini, the birth place of the Buddha. I saw a sticker on the back of one of the buses that read “Buddha is Nepalese!”

Between hopping on and off, and hanging out the door while cruising down the bumpy highway, this guy working on the bus probably spent more time outside the bus than inside: 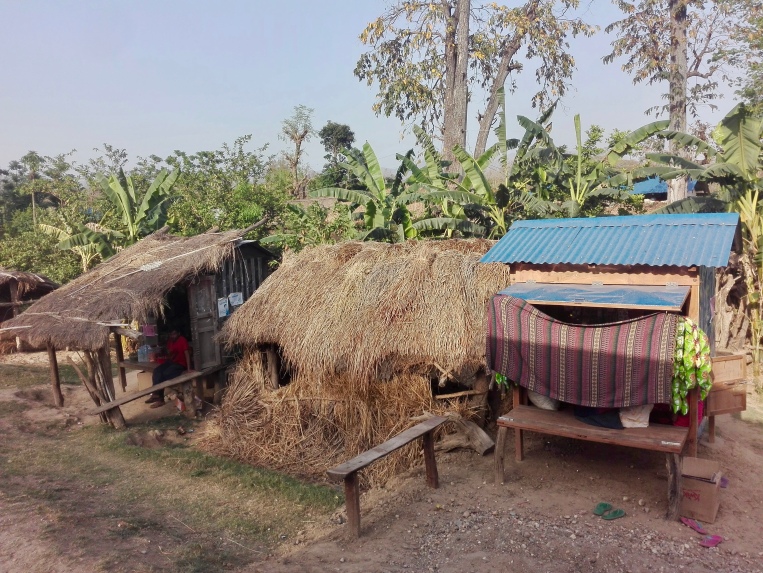 Random observation: I was a little caught off guard in discovering that Nepalese women are beautiful. It’s not exactly what I would expect: “Come to Nepal! Best trekking in the world through magnificent snow-capped peaks…and lots of babes!” The women are skinny here too, even the older women. Andrea and I had noted that spotting a woman in India above 40 that isn’t significantly overweight is a rarity. A pleasant surprise Nepal! What else do you have to offer?!

We arrived in लुम्बिनी (Lumbini) yesterday night after eight hours for what could have been under five hours, but I already complained about that enough, so let’s talk about something else. People are so freakin’ nice here! I keep finding over and over that when I get really flustered or upset a local shows this brilliant kindness and it immediately lightens my mood. For example, just while riding on the bus we were on a final bus to Lumbini and had only five minutes left to our ride; we were hitching on a bus that was going all the way to Kathmandu, a full nights ride ahead. One of the local women was insisting on letting us take her and her son’s seats just because she could see how discombobulated we were. It may not seem like much, but if you witnessed the genuine desire to help us it would be easier to understand. Similarly, we have received so much help from locals. Getting off the bus, a couple women asked us what we were looking for (a hotel) and they called to have a man from a hotel come and escort us to the hotel. Similarly, hitch-hiking, people ask us all sorts of questions. I now have the phone number of a man who gave us a ride and I’ll be sure to contact him once we make it to Kathmandu, where he lives. Again, the genuine feeling emanating from everyone is the key here. It’s a constant and beautiful mood-lifter.

So, Lumbini is famous for being the birthplace of Siddhartha Gautama, aka the Buddha. It is more of a religious pilgrimage site than a town. Just on the outskirts on the southeast side there is a cluster of hotels, restaurants and shops where tourists may take up temporary residence.

We knew very little about Lumbini before arriving other than that there are a lot of temples. We found a spot to rent bicycles and then took our ghetto riders onto the street. The rickety seat and brakes that evoked justified concerned reminded me of the days of dumpster diving for parts and assembling makeshift bikes. We hopped from temple to temple exploring the area. 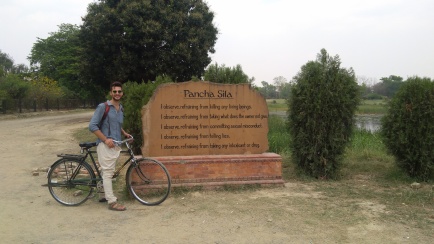 Despite the abundance of signs clearly stating “be silent” I was distracted from getting into the moment by two chatty Nepalese men that entered at the same time as me. Many of the temples were sort of ruined for me for this same reason. My theory is that since these people are all Hindu, they don’t have as much interest in the sites. It’s more of a box checking process: snap a selfie with the monument and move on. 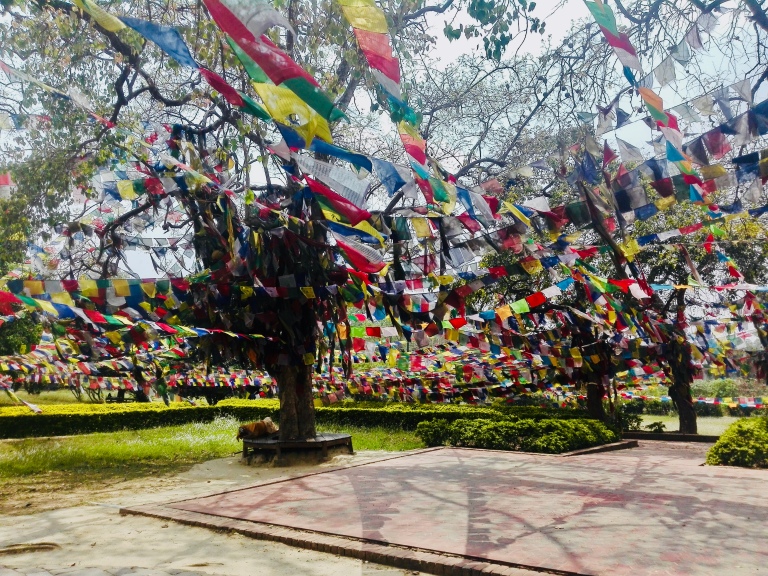 Overall I was actually unimpressed with Lumbini. There are a whole bunch of temples, many of which are dedicated by a different, often majority-buddhist, country; Thailand, Cambodia, Myanmar, Sri Lanka, India, even Canada! These temples are generally very aesthetic but there isn’t access to much, or there is nowhere to meditate, or there is a groundskeeper watching an obnoxious video on his phone while slouched in the corner of the room. All in all, not very zen-like. There is a Vipassana center as well but the frequent motorcycles passing by the ground make me question how well one could really focus here. Oh, and it was HOT today; I think it reached 100°F. There was also a lot of incomplete construction going on. My final impression is that there is a lot of potential for Lumbini but at the moment it is not much of a noteworthy destination. 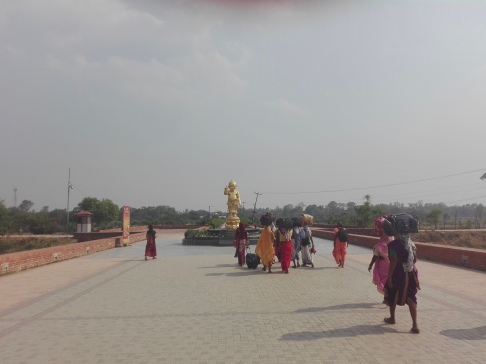 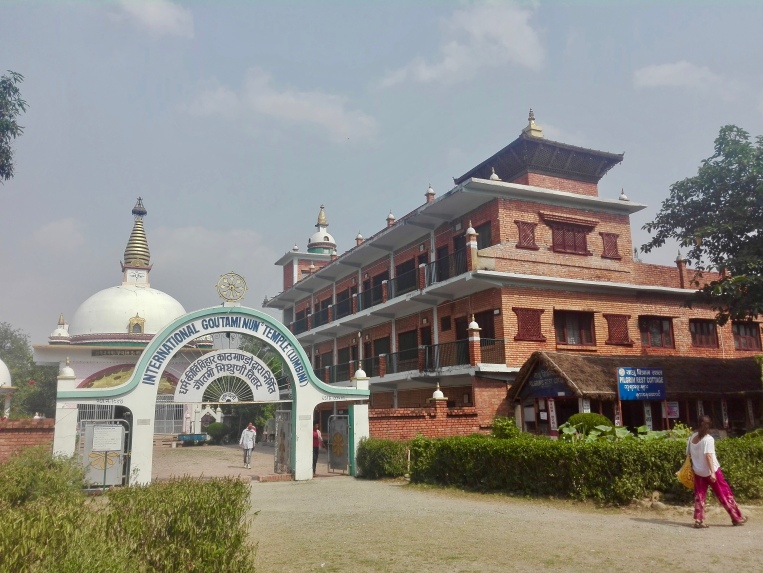 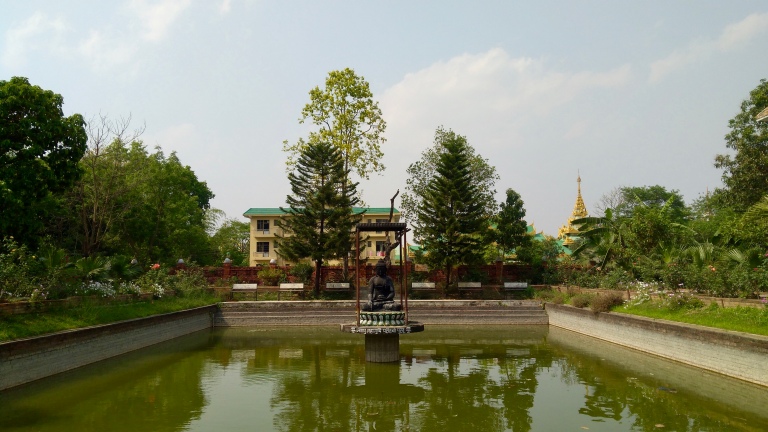 We make our way to Pokhara early tomorrow morning. One bus straight there. Hopefully not too many stops, fingers crossed!