Shortly after arriving in Pokhara Andrea and I began our research on treks in the area. While the Annapurna Circuit Trek is known as the ultimate classic, it felt a bit long, at a minimum of twelve days assuming you were cruising. We instead opted for the Annapurna Base Camp (ABC) Trek, which is only 8-10 days.

It was a pleasant surprise to discover that everything necessary for the trek was readily available in town, and either for a modest rental price or for purchase at a similar rate. We bumped into a group of guys that had just gotten back from a trek and asked about anything we may need to bring. They explained that they bought 30 rolls of toilet paper and somehow they used it up in only the first few days. Andrea and I had a recurring joke for the rest of the trek: “BRING TOILET PAPER!!!!!!!!!!” “Did you bring a backpack full of toilet paper?! You’re going to need it! You need to hire at least three toilet paper porters to bring all your toilet paper!!!”

We opted for two rolls. Some essentials we did bring though: water purification tablets (not necessary but saves a lot of money as an alternative to buying water), lunch snacks (same reason), headlamp, change of clothes and rain jacket. Turns out sleeping bags were unnecessary as there are huts with beds and big fluffy blankets for every night.

Day 1 was a long one, and not due to the hiking. We took a bus through the long windy foothills until reaching Birethanti, where the trek begins. By the time we had started hiking it was already 1:30pm.

It was a slow recovery from the bus-sickness but as the unpaved road transformed into a connection of stone paths and trails our moods similarly changed.

This first day felt a lot like hiking in the alps. Stone pathways and frequent villages consisting of a handful of huts offering lunch and coffee reminded me of my explorations through Austria. 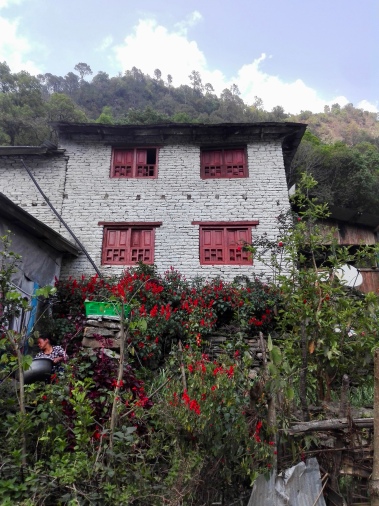 The second day we carried on to Ghorepani 9380ft [2860m]. The path consisted of scenic “hills” that would count as mammoth mountains anywhere else, as well as some pretty streams and chilled out wildlife. 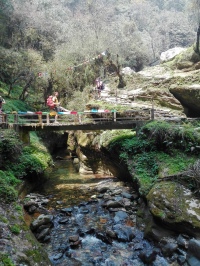 Unfortunately, Andrea ended up getting horribly sick that night. I’ll just say, I have seen this girl tough out some serious sickness in our time together and this was next level. When Andrea can’t handle it…you know it’s bad.

So we had a chill day, hanging out in Ghorepani for day 3. The day subsisted mostly of playing cards, chess and sleeping. I made a quick hike up to Poon Hill, the nearby viewpoint, but there was little to see due to the cloud coverage.

I’m am not sure of the full extent of it, but much of Ghorepani is run and owned by a single extended family. The hut we were staying at was run by a sister and brother that had grown up here in the mountains. They were kind enough to let us hang out while cooking our Dhal Bat (the classic nepalese meal consumed by the average local consistently twice a day) and get some recipes and cooking tips.

The next morning I got up before early to head up to Poon Hill for sunrise. My Andrea opted not to get up because of her sickness, but fortunately I had a substitute spanish-speaking Andrea that joined me for the early morning haul.

I have never seen so many hikers in my life. It became an endless line slowly chugging up the stairs. I was able to skip ahead of some slower groups and find a nice place to sit for the sunrise. Unfortunately the cloud coverage left little visibility. The clouds broke briefly to a faint outline of the distinctly prominent Machhapuchhre (nepalese for Fishtail). Oh well…time to get the day started.

Andrea (la mia Italiana) and I made our way out from Ghorepani. I gotta say, this girl is a real trooper. Even when she was sick in bed and I was making plans of our evacuation, she was explaining how determined she was to get to Annapurna Base Camp and how essential it was that we get there.

The day was a bit of a change. We walked through misty forests that felt incredibly magical, especially once we spotted the white ponies freely exploring the wilderness with us. This was followed by a long ridge with just enough clarity to occasionally see the steep drops on either side through the fog. 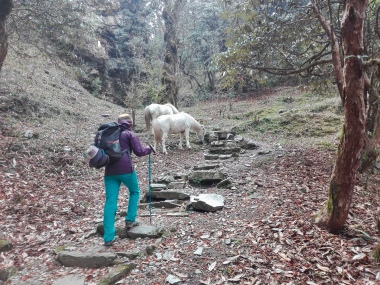 Ominous thunder rumbled overhead for some time and then just as we reached a stream at the bottom of a very steep valley it began to hail torrentially. After chugging up stairs that had suddenly transformed into a river, we arrived in Tadapani: 8630ft [2630m]. We found a hut with a warm fire and somehow stomached some terrible Dhal Bat while drying off.

Slowly, bit by bit, the clouds parted giving way to small snippets of the vast mountain range we were resting at the feet of. Eventually we got some beautiful views of South Annapurna and Machhapuchhre: 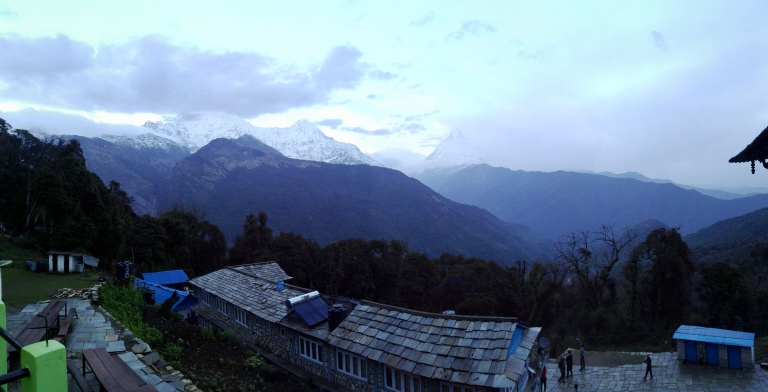 The next day was a beautiful one. My nose got red as the scenery got more and more green. The hillside agriculture in the Himilayas can be absolutely beautiful. See for yourself!

This was a long day. We arrived late in Bamboo, 7580ft [2310m] which was our first hut along the actual path to Annapurna Base Camp. The feeling had changed quite a bit, as, at this point, we were no longer in an area inhabited by locals. The huts along this trail were solely there for trekkers.

We enjoyed a change of pace dinner of pizza and pasta while talking to a wild and fascinating character from the Netherlands who had so mastered is present moment awareness that he struggled to recall things from the past. We also chatted with a couple of interesting nepalese locals, learning some things about the nepalese culture. For example, child marriage is apparently a “thing” or problem in Nepal, however you’d like to interpret it. After hearing media coverage over these poor girls being forced to marry before reaching their teens, I was relieved to hear from these guys that these arranged marriages are between a boy and girl of the same age. Of course this doesn’t make it “good” but it’s not even comparable to arranging these girls to be with adult men.

So I had already learned, shortly after coming to Nepal, that they had only become a democracy in 2016, which in it’s own right is crazy! However, the thing that had caught my attention and that I found very funny about this interaction in our cold hut, was this Nepalese local’s impression of when the United States had become a democracy: 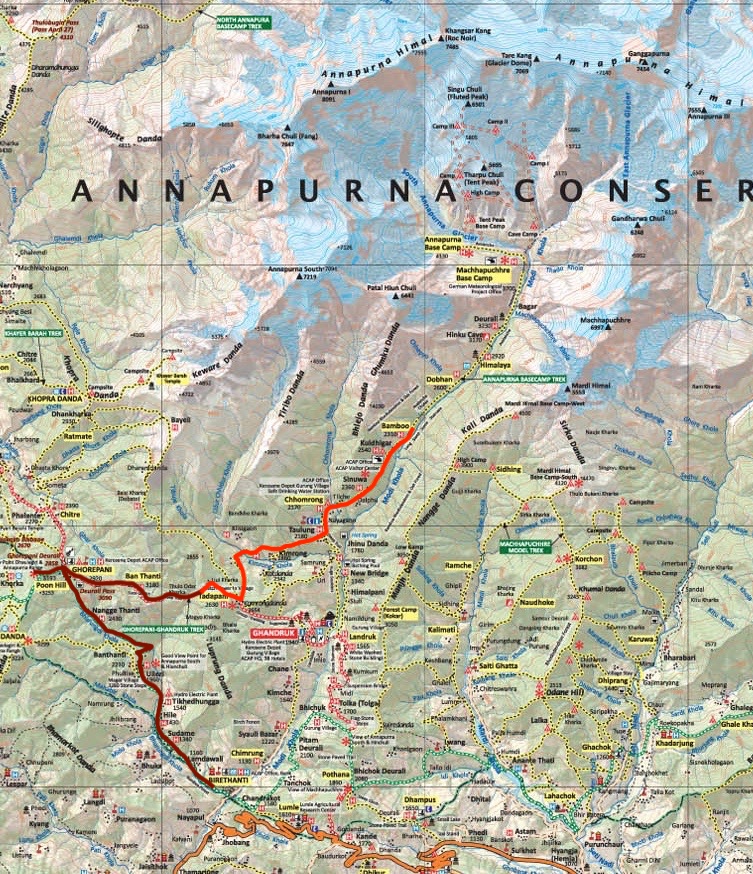 Everything available along the ABC trek, food, propane, medical supplies and such, is hauled up by local porters. They are often wearing adidas jumpsuits and even flip-flops! The use straps to tie two or more massive bags together and then use a backpack system that puts the majority of the weight on a single strap that runs over the head. Anytime I felt tired my propensity to complain would be immediately cleared by a thought of what these guys are enduring. Speaking of which…always guys. Once we left the village “lowlands” there have only been male locals.

Day 7 we made it to Annapurna Base Camp! Our final elevation: 13550ft [4130m]. The way up was absolutely spectacular: following along a stream with interlacing hills defining the valley all the way to the end point, Annapurna III. Water crashed down steep rock faces to form a series of frequently crossed tributaries.

We pigged out at basecamp, treating ourselves to some expensive hot pudding and chapatis. It quietly snowed outside. We enjoyed card games with some other similarly happy trekkers as we reveled in our accomplishment. 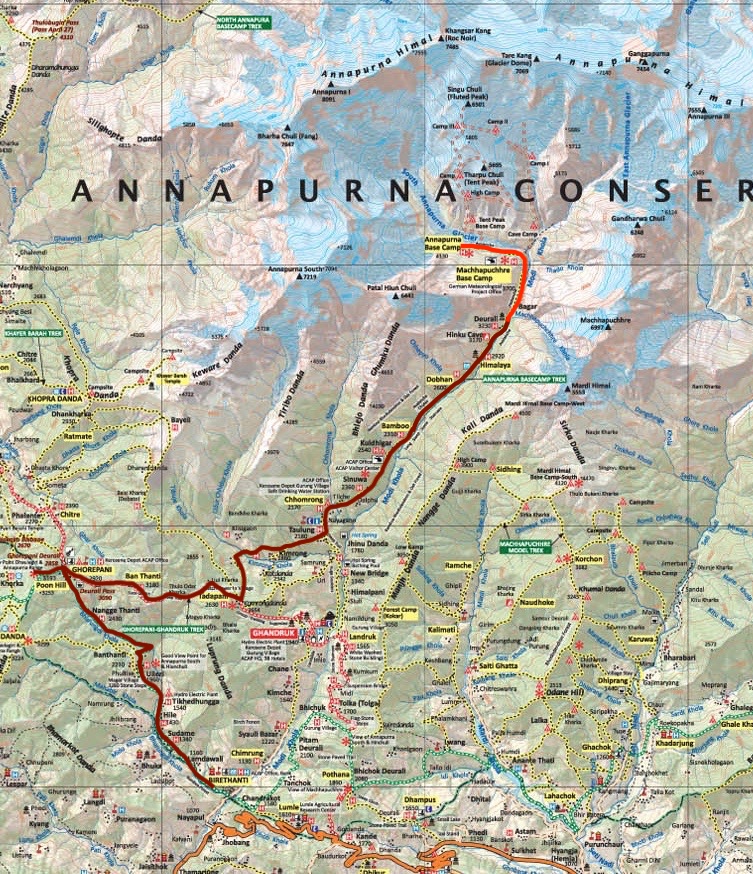 The sunrise was a complete whiteout. Time for a photoshoot! 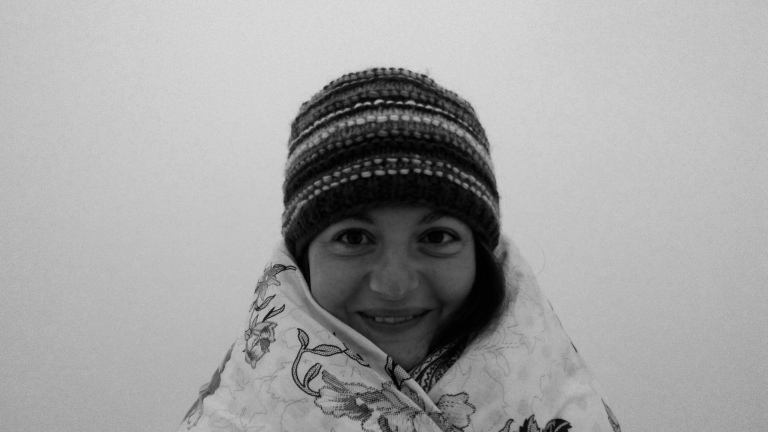 On our way down from Annapurna Base Camp to Machhapuchhre Base Camp the clouds parted to make a continually better and better view. Thank you weather!!! 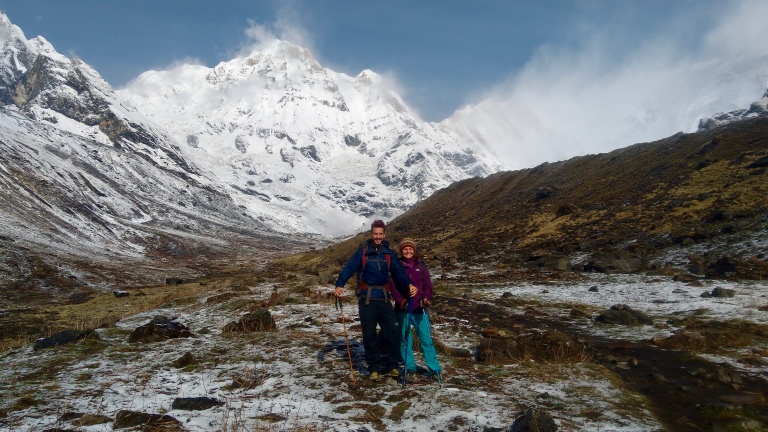 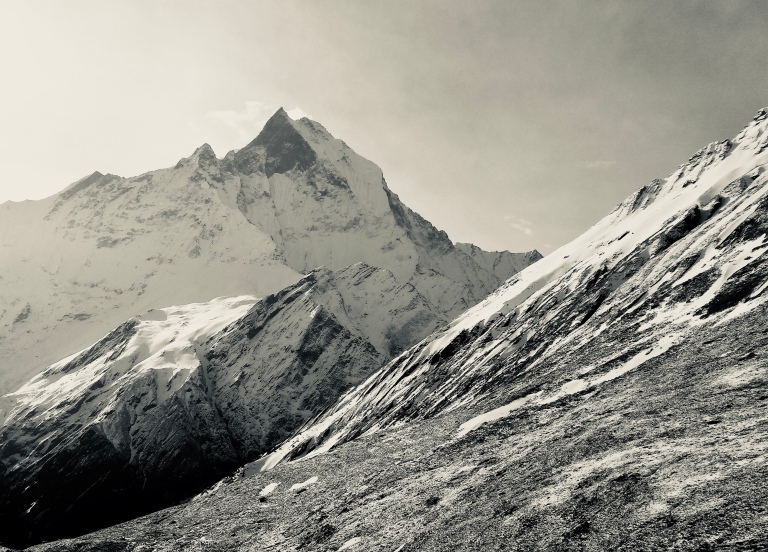 The sunny skies were perfectly timed, but as we left the encircling mountains, the clouds came back in and it started to rain. In a single day we experienced snow, sun, hail and rain…and rain…and more rain. Absolutely drenched, we descended to Sinuwa and spent the night huddled by a small fire drying our clothes.

Last day! We made our way of of the Annapurna Trail, back into the area inhabited by locals, and down to…drumroll….Jinhu hotsprings!!!

Natural hot springs right next to a cold river were a wonderful and well earned end to the trek. I don’t ever want to end a hike another way!

On our way down to Jinhu hot springs, Andrea and I made friends with a local Pokhara resident. Our new friend, Robby Roti, and his friends, were all medical students at the nearby university. They had been “boinking” or, skipping class, to go on a trek up to ABC.

These guys quickly adopted us into their crew, and when the local jeep drivers refused to take all of us in a single jeep, Robby and his friends stuck with us like family, arguing for us, until we finally made it work. Thank you so much guys!

After a long and goofy ride with these crazy nepalese dudes, we arrived tired and hungry back in Pokhara. Time to pig out on some delicious food!

One thought on “Annapurna Base Camp Trek”